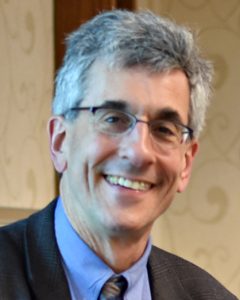 Much of our work has focused on the structural and functional characterization of novel biologically active analogues of glucagon and glucagon-like peptide-1 (GLP-1). We are trying to understand at a molecular level how interaction of these hormones with their cognate G-protein coupled receptors (GPCRs) transmit signals to the cell interior. Synthetic agonists of the GLP-1R are widely used to treat type 2 diabetes. Our work was originally motivated by the goal of developing backbone-modified GLP-1 analogues that retain potent agonist activity but resist degradation by proteases (the half-life of GLP-1 itself in the bloodstream is only a few minutes). Pursuit of this goal led to an unexpected discovery that the structural changes we introduced into the agonists caused subtle changes in receptor-mediated signal transduction. GPCR signaling involves the association of diverse intracellular proteins with the cytoplasmic surfaces displayed by the receptor in the agonist-bound state. We found that the relative preference for engagement of distinct partners, G protein vs. β- arrestins, could be altered by β residue incorporation. Understanding how this “biased agonism” arises, and using biased agonists to elucidate cellular signaling pathways, have been major recent themes in our research program. These efforts have also identified unanticipated modes of agonist conformational dynamics that appear to be important in signal transduction.